A small part of you will enjoy it. Not his sore throat, because you would take all of his pain for yourself if you could. Not his restless turning in bed, his sweaty body tangled in a mess of blankets and pillows and sheets, and you can’t seem to find the right amount of layers to make him comfortable. Not his runny nose, which he refuses to let you wipe because it’s red and sore from all the times he’s rubbed it raw with his strong, small fingers. Not his cough, which heaves his body forward and makes him place his palms on his chest, saying, “ay ay,” the Russian exclamation for pain, because even pain has its own language, and is distinct in each tongue. Not any of the things that make him suffer. And you hate yourself for admitting you enjoy even the tiniest fraction of what hurts him.

But, when your toddler, who never stops running or spinning or jumping or dancing, who never stops chatting or flailing or climbing, who throws himself at walls, pillows, the couch, your animals, your chest, the legs of strangers, when your child, who is all force and energy—and you know he gets this from you—when he slows down and lays his head gently on your fat cat and then your dog and then even on you, a part of you is grateful for his deceleration, regardless of the reason for it. 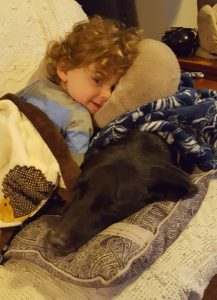 When he asks for hugs to last longer and for kisses to fall on his eyelids, when stays still and curls himself smaller so that you will hold all of him, you can’t help but enjoy how much of him your body can still contain, even if only for a brief instant. When he asks you to stay in his room and keep making the “sh sh sh” sounds to get him to fall asleep, how can you refuse? So you rub his back and whisper, listening to the way his breathing changes, from barely audible—save for the bubbling of his congested nose—to a heavier, syncopated inhale exhale that’s almost a snore, almost a pendulum tick-tock of him regaining strength, getting better with each labored breath.

And when he wakes—his nose clearer and cough almost gone, his eyes wide with vigor and feet stomping on the changing table and hands playing drums on the wall—he refuses to let you dress him, refuses your hands. You realize then that it wasn’t his slowness that brought you joy. It wasn’t the ease of keeping up with him in his weakened state, but rather a return to need. To him needing you. The way he needed you when your body was his only home. The way he needed you when when your flesh sustained him, with its milk and warmth. The way he needed your chest to sleep soundly because your heartbeat and breathing were his lullaby. The way your body spoke the only language he knew, the only one that could ease any pain, intuitively. The way you had a language of need that belonged to just the two of you.

But now, it’s all about want. He wants you to help him put on his socks, or he doesn’t want to wear clothes today, or he wants this toy and not that one, or he wants a snack that’s exactly the same as his but better because it comes from another child or mom or the floor. And need is almost forgotten. You’ve both taken for granted that those needs that once defined you have been mostly met. So you’re left with want, both yours and his. Your want for him to need you again, and his want for you not to be as needed.

The sky in June
rises with horns,
my grandmother’s
about her neck in gold,
and sets with chelae, claws,
pincers, the many names

for mother.
A bull gives birth
to a crab, a crab to a ram,
a ram to the cusp
of scorpion and centaur—
the sky grows full
with parturition.

How many names
for this? The looking up.
The summer stars
and all their distant
meaning. The many
names for mother.

How animal
to fit inside
another
and human
to tear our way
back out.